The new 2020 Automobili Pininfarina Battista all-electric hypercar arrives with 1,873bhp and will sprint from 0-62mph in under 2 seconds The new Automobili

New Pininfarina Battista is the most powerful road-legal car ever 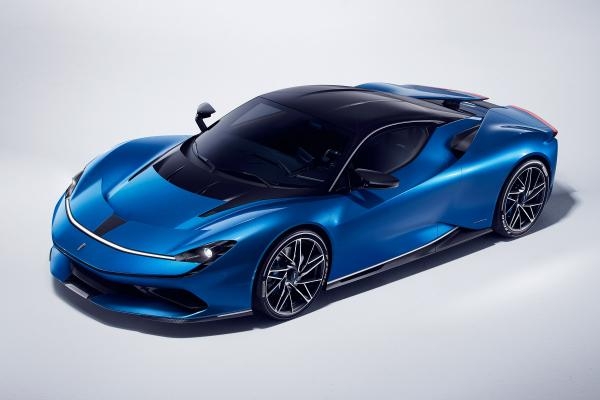 The new 2020 Automobili Pininfarina Battista all-electric hypercar arrives with 1,873bhp and will sprint from 0-62mph in under 2 seconds

The new Automobili Pininfarina Battista will be the most powerful road-legal car ever produced, the firm has revealed, after it announced a full specification for the model that made its debut at the Geneva Motor Show. The new all-electric hypercar will have almost 400bhp more than a Bugatti Chiron, along with all-wheel-drive and a carbon fibre monocoque.

The Pininfarina Battista is powered by four electric motors (one for each wheel), producing a combined output of 1,873bhp and 2,300Nm of torque. As such, the Italian firm claims a 0–62mph time of less than two seconds, a 0–186mph sprint of 12 seconds and a top speed of 217mph.

• The best hypercars ever

Powering the electric motors is a 120kWh liquid-cooled lithium-ion battery, mounted low in the car’s chassis and laid out in a T-shape configuration to aid the car’s weight distribution. The powertrain was developed via a partnership with Rimac, and Pininfarina is targeting a maximum range of around 280 miles between charges. 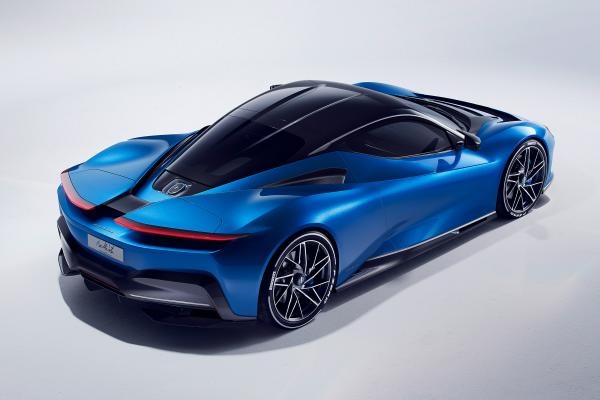 The Battista’s chassis is built around a carbon fibre monocoque, to which is mated a carbon fibre and aluminium rear subframe. Features include a set of carbon-ceramic brakes with six-pot calipers, a torque vectoring system, adjustable suspension and an active rear wing and a range of passive aerodynamic vanes.

Production will be strictly limited to just 150 units when the hypercar reaches the market in 2020, with the USA, Europe and Middle East getting 50 examples each. Every model will be hand-built at the firm’s facility in Turin, and prices are expected to range between £1.5 million and £2 million.

Pininfarina’s claims to offer “almost endless” opportunities for interior customisation and, given the model’s exclusivity, it’s likely each will be tailored towards the buyer’s preferences, with the upholstery, stereo and trim all being interchangeable. Features expected to persist across each car will be the dual-screen infotainment system and ambient LED lighting. 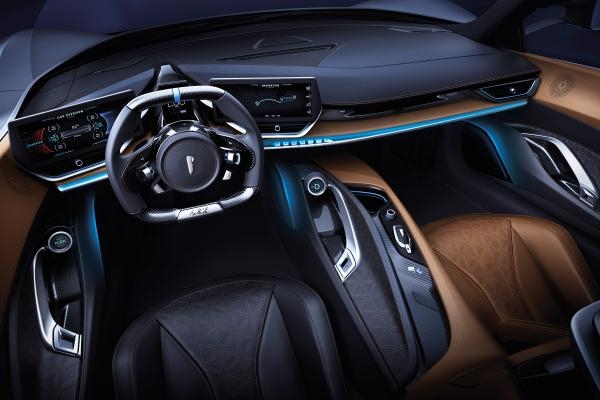 Pininfarina at the Geneva Motor Show

Automobili Pininfarina’s second show car was finished in Blu Iconica, a shade which closely matches the coachbuilder’s signature blue used on the early official Battista teaser model. Other additions include a series of bonnet and wing-mirror modifications and a reworked exterior LED light strip.

Pininfarina’s third Battista was shown on Pininfarina’s second stand. Finished in pearlescent white, it had the same 21-inch alloy wheels, a red coachline above its side skirt, red brake calipers and dark chrome exterior trim.

In 2015, the famous Italian coachbuilder and design house was acquired by the Indian firm Mahindra & Mahindra. Shortly after the acquisition, Pininfarina announced it would start producing its own vehicles as Automobili Pininfarina (alongside its existing consultancy business), borrowing the all-electric expertise gained by the Mahindra’s participation in the inaugural 2014–15 Formula E season. 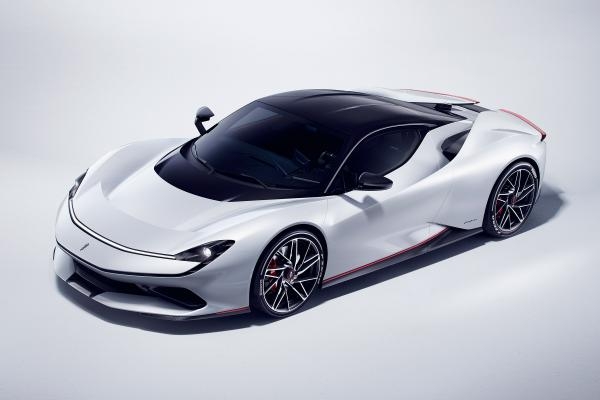 The Battista’s design was carried out under the direction of Automobili Pininfarina’s recently-appointed design director, Luca Borgogno, who moved across from the firm’s existing consultancy division. The sketches released by the firm are said to be Borgogno’s early vision for the car.

Late last year Pininfarina named its new hypercar, dedicating it to the company’s founder, Battista Farina. When making the announcement, the company’s chairman Paolo Pininfarina, grandson to Battista Farina, said: “This is genuinely a dream come true. My grandfather always had the vision that one day there would be a stand-alone range of Pininfarina-branded cars. For me, we simply had to call it Battista.”

To celebrate Pininfarina’s technological partnership with Mahindra Racing, a uniquely-liveried example of the Mahindra Formula E racer will feature on the firm’s second stand alongside the firm’s pearlescent white Battista.

Do you think the new Automobili Pininfarina Battista will be a success? Let us know below…