The Nissan IMQ concept has been revealed at Geneva, giving a thinly disguised look at the new Mk3 Nissan Qashqai Of all the exotic concept cars on show at 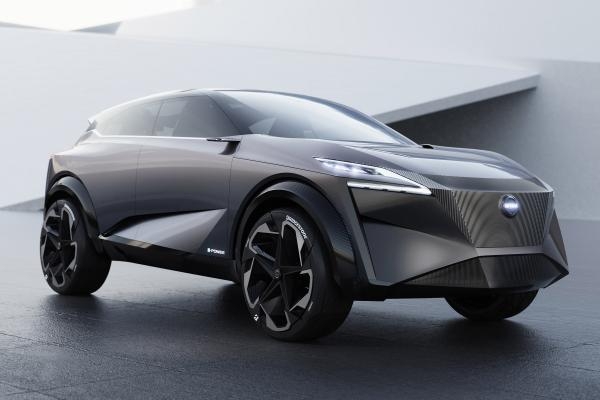 The Nissan IMQ concept has been revealed at Geneva, giving a thinly disguised look at the new Mk3 Nissan Qashqai

Of all the exotic concept cars on show at the 2019 Geneva Motor Show, the most significant is probably this, the Nissan IMQ.

Behind the 22-inch wheels, rear-hinged back doors, exotic slatted grille and floating glass roof is the shape that will eventually become very familiar to UK SUV buyers – it’s a thinly disguised look at the third generation of the Nissan Qashqai, the UK’s biggest-selling SUV.

IMQ follows on from the IMx concept revealed at the Tokyo Motor Show in 2017, with IM standing for ‘intelligent mobility’ – in this case the IMQ features a development of Nissan’s hybrid e-Power technology. 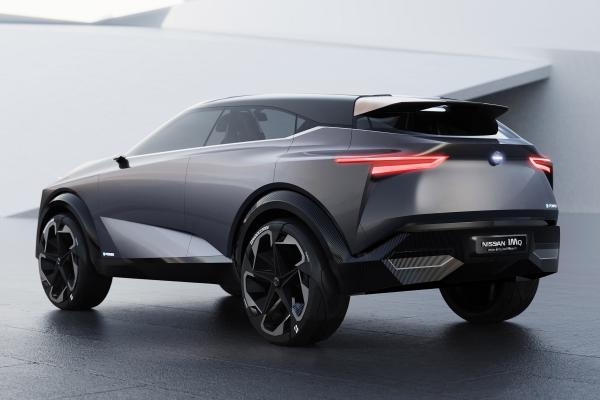 However, the Q in IMQ is a clear nod to the next Qashqai, with Matthew Weaver, Executive Design Director of Nissan Design Europe telling us, “I could imagine a lot of this car we could see in the near future.

At 4,558mm long and 1,940mm wide, IMQ is 164mm longer and 134mm wider than a Qashqai. However, the floating glass roof with its carbon fibre structure and copper details sits 30mm lower and drops dramatically towards the rear with a prominent spoiler giving the concept a real coupe look.

IMQ also features some intricate surfacing along the flanks of the car in a figure of eight shape, along with a theme running through the car: lamellas – closely grouped lines that feature in the over-sized grille and on the black cladding around the lower edges of the car, including the wheel arches. The lamellas are inspired by the Japanese principle of “Ma”, meaning structural harmony, and are said to improve airflow around the car.

Although the grill is likely be toned down for production, Weaver did tell us that it, along with the slim boomerang LED lights, was “a new way of showing Nissan’s V-motion identity”.

The dark lamella patterning around the bottom of the car is designed to show the parts of the car that “hold the powertrain”. And although the lamellas look hugely intricate, Weaver confirmed that both that patterning and the complex side surfacing “could go into production.” 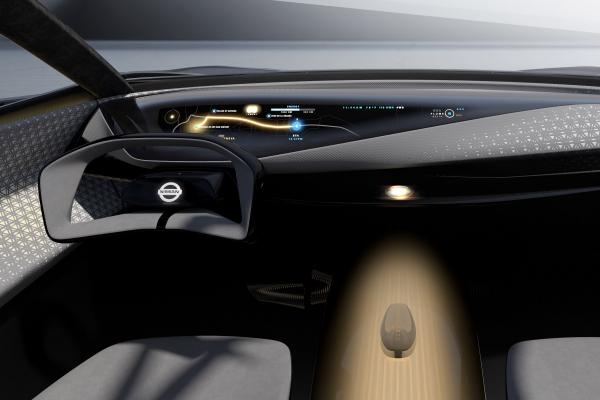 The e-Power powertrain has been hugely successful in Japan where it’s used in a version of the Note that was the country’s best-selling car last year. There it uses a 1.2-litre engine as a generator to charge a battery, which provides 100% electric power to a motor.

In spite of the petrol engine on board, emissions are considerably lower than a petrol-only powered SUV, while the driving characteristics are said to be the same as a high-powered EV with instant acceleration. 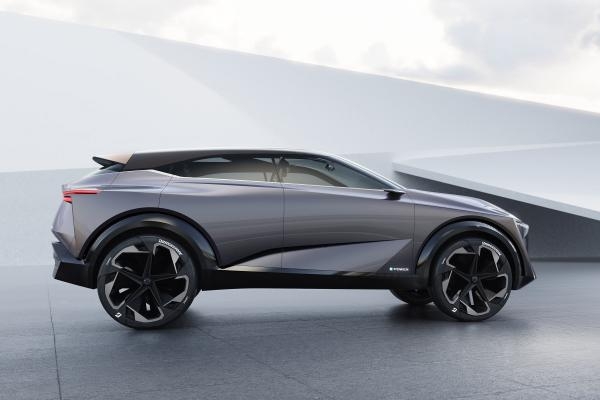 Nissan is working on a production version of e-Power for Europe so it’s a safe bet that it will find its way into the next generation of Qashqai, but it could also feature in next year’s new Juke, too.

While the exterior is a clear hint at the next Qashqai, the IMQ’s interior is more pie-in-the-sky stuff. The four seats float over a floor that features more lamella designs, while the translucent structural beam running the length of the cabin in between the seats features a similar style.

Some of the tech could feature in a new Qashqai, though, such as the asymmetric dashboard featuring an 840mm-wide screen in front of the driver and softer materials in front of the passenger. A second screen features a Virtual Personal Assistant to control some of the car’s functions such as navigation and climate control, while I2V Invisible-to-visible technology, which claims to help drivers see ‘around corners’ to avoid jams and find parking spaces.

While officially IMQ remains officially just a concept, Nissan is saying that it “signals what the design direction may be for the third-generation of Nissan crossovers in Europe”. We’d expect to see something looking very similar wearing a Qashqai badge on sale in late 2021.

Want to know more about the next Nissan Qashqai? Click here for everything we know so far…