The Lamborghini Aventador SVJ drop-top has been revealed at Geneva, powered by a 759bhp naturally-aspirated V12 Lamborghini has shown off its new Aventodor SVJ 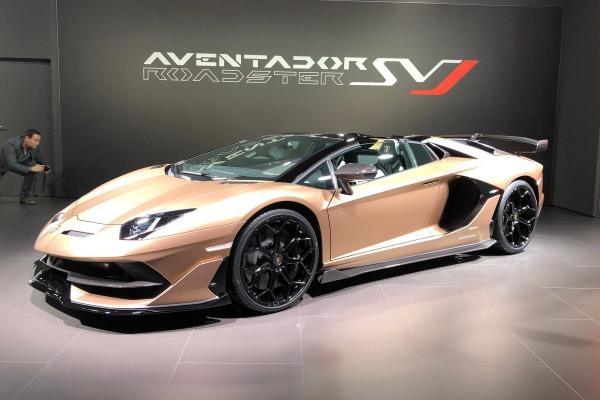 The Lamborghini Aventador SVJ drop-top has been revealed at Geneva, powered by a 759bhp naturally-aspirated V12

Lamborghini has shown off its new Aventodor SVJ Roadster at this year’s Geneva Motor Show. Due to reach the UK market in the summer, each model will be priced from £323,323 (excluding tax). Production will be limited to 800 models worldwide.

Rather than an electrically-folding roof Lamborghini has opted to fit a quick-release carbon fibre roof panel that can be stored under the Aventador’s bonnet. Lamborghini claims the open-top Aventador’s structural rigidity remains uncompromised over the coupe but it does weigh an additional 50kg.

Power is fed through a seven-speed dual-clutch transmission to an all-wheel-drive system, allowing a claimed 0–62mph time of 2.9 seconds, a 0–124mph time of 8.8 seconds and a top speed of 217mph.

Also featuring on the new SVJ Roadster is the latest version of Lamborghini’s patented active aerodynamics system. Consisting of a series of motorised flaps and air dams, the system claims to modify the amount air pressure on the front spoiler, rear diffuser and rear wing, providing either handling or top speed advantages when necessary.

Inside, the Aventador SVJ convertible gets customisable leather and Alcantara upholstery, a pair of bucket seats, a digital gauge cluster and a dash-mounted infotainments system with support for Apple CarPlay. The rear window can also be opened independently of the roof, allowing more engine noise to creep into the cabin.

Now read our review of the Lamborghini Aventador SVJ Coupe. Let us know your thoughts in the comments section below…